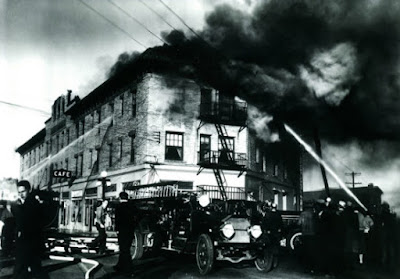 Did you know that John Dillinger, one of America's most notorious criminals, was arrested in Tucson at the Hotel Congress? In late January 1934, five members of the Dillinger gang, including Dillinger himself, were arrested in Tucson. They were five of the top six names on the FBI's Public Enemy list. A fire allowed firemen to discover their identity and the police promptly arrested Dillinger and gang members Harry Pierpoint, Charles Makley, Russell Clark, and Ed Shouse. The police found the gang in possession of over $25,000 in cash, 3 submachine guns and five machine guns. Tucson celebrates the historic arrest with an annual "Dillinger Days" festival, the highlight of which is a reenactment.
Posted by Website Editor: Wordsmith at 12:00 AM