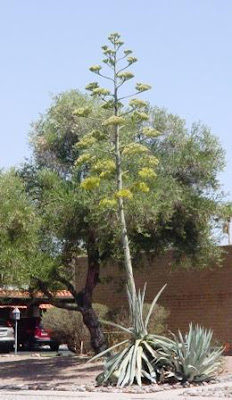 When I moved to Arizona I learned about the amazing musical instrument called the didgeridoo. You can make one yourself from the mature stock of the Century Plant. To hear the sounds this ancient and unusual instrument can make, click here.

In 1933 Time Magazine wrote about the century plant and tried to clear up the misnomer of it being called a "Century" plant. It's a fun article: click here.
Posted by Website Editor: Wordsmith at 12:28 AM