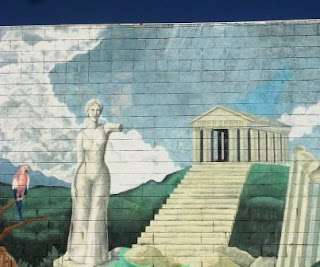 With the likeness of the Parthenon in the background, a good guess might be that this one-armed lady is Athena (for whom the Parthenon was built). But I'd rather think of her as Venus de Milo's sister.

Venus's sister is part of the remarkable fantasy murals that decorate the exterior walls of Bookman's, a great Tucson bookstore (used and new books plus so much more). If you would like to see the full range of murals, in July I posted the "Dragon Slayer" and "Mr. Be-header" was posted in August. Still coming up are "Damsel in Distress," "Evil Queen," and "Pirate Ship."

Store staffers tell me that they have given the mural characters pet names. This lady is affectionately named "Sophia."

http://www.bookmans.com/Grant & Campbell
Posted by Website Editor: Wordsmith at 5:21 AM

Image available on a t-shirt. (:

I am proud to sponsor this site!