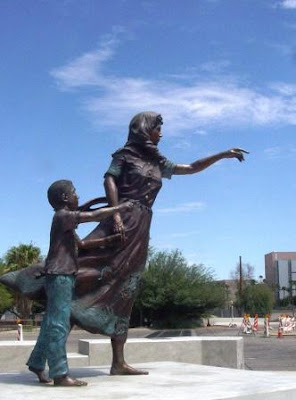 This powerful bronze sculpture of a Mexican mother and child stands on ground that was razed to build, among other things, the Tucson Convention Center. Plaques surrounding the sculpture quote former residents of the (now, lost) Barrio and record their sadness. "Los Tucsonenses" - the Mexicans living in the Barrio - were displaced and this sculpture is intended to honor them. It is entitled, "Fighting sprawl and City Hall."
Posted by Website Editor: Wordsmith at 12:01 AM