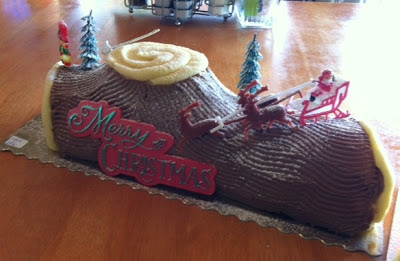 A classic holiday dessert in France, the "Buche de Noel" (Yule Log) is, a spectacular centerpiece on any dessert buffet. This beauty was created by the pastry chef at Ghini's on Prince near Campbell. Order in advance!

Here's what Wiki says: The traditional bûche is made from a Génoise or other sponge cake, generally baked in a large, shallow Swiss roll pan, frosted, rolled to form a cylinder, and frosted again on the outside. The most common combination is a basic yellow sponge cake, frosted and filled with chocolate buttercream; however, many variations on the traditional recipe exist, possibly including chocolate cakes, ganache and espresso or otherwise-flavored frostings and fillings.

Bûches are often served with a portion of one end of the cake cut off and set on top of the cake or protruding from its side to resemble a chopped off branch, and bark-like texture is often produced in the buttercream for further realism. This is often done by dragging a fork through the icing. These cakes are often decorated with powdered sugar to resemble snow, tree branches, fresh berries, and mushrooms made of meringue.

The name Bûche de Noël originally refers to the Yule log itself, and was transferred to the dessert only after this custom had fallen out of use, presumably during the first half of the 20th century. It is attested in 1945 as referring to the cake. The cake recipe itself is older, and known to date to the 19th century.
Posted by Website Editor: Wordsmith at 12:00 AM