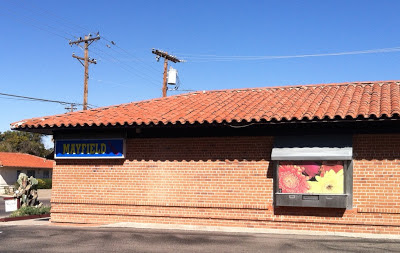 Recently I asked site visitors if they had requests for any of the thousands of posts that have appeared on the site. Kathy from Boston wanted to revisit this Mayfield Florist photo. Here is my original post from February 2013:

The Mayfield Florist shop is located in a building that was once a pharmacy or a bank with a drive up window. They don't actually use the window (inside it's just a display area) but it's an interesting concept, don't you think? For that guy running a little late to pick up his girlfriend... just drive up, get your flowers, and you're on your way! Maybe I'm onto something here....

And Kathy replied to that post that it WAS a pharmacy and the pharmacist there wrote her a recommendation letter for her pharmacy school application!  Cool story!
Posted by Website Editor: Wordsmith at 12:00 AM