The Mystery of the Tucson Grizzly Bear ~ 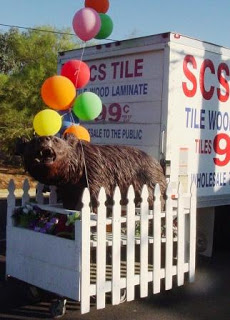 When I began doing this site in 2009 I never planned (or expected) it to be a chronicle of Tucson's ever-changing landscape. Over the years I have posted photos of murals that have subsequently been removed, buildings that have been torn down, and businesses that have closed. This fierce bear no longer guards the tile store - the store has been closed now for a long time. Here is the original posting:

So driving along 22nd Street I spotted this little picket fence box on wheels that holds a fierce grizzly bear. A plume of colorful balloons adds that "je ne sais quoi" to the whole tableau. He serves as the mascot for a local tile company.
Posted by Website Editor: Wordsmith at 12:00 AM