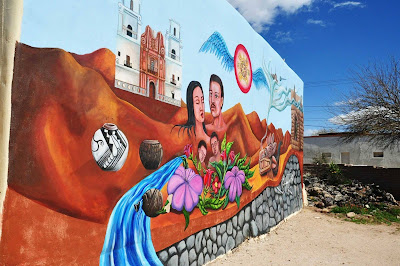 Rich in history and tradition, Tucson's Barrio District remains a fascinating window into the early years of Tucson and the settling of Arizona. Huge portions of the area were razed to build the Tucson Convention Center in the latter part of the 20th century. This mural depicts a view of Mission San Javier and many other cultural symbols and imagery.
Photo courtesy of Mark Wight.
Posted by Website Editor: Wordsmith at 12:00 AM