The mysteries of life.... 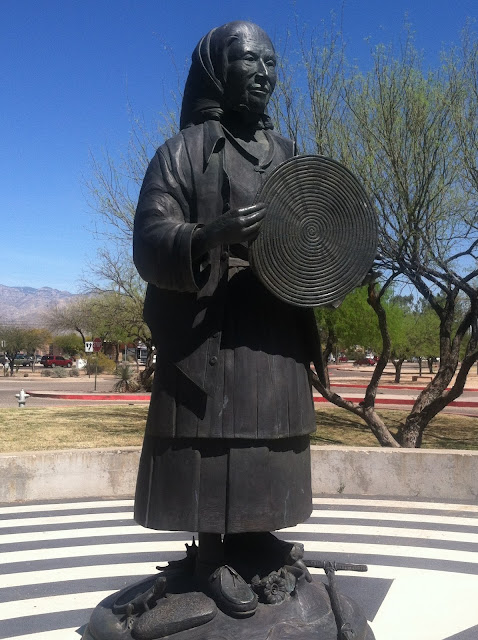 This powerful Mark Rossi sculpture is in front of the main building at Udall Park. The Tohono O'odam woman is holding a "Man in the Maze" basket and is placed within a labyrinth/maze herself. Here's what the Smithsonian Art database says about this piece:

The sculpture is made up of two sections: a female figure on a pedestal and a landscaped ellipse within a circular driveway. The figure depicts Tohono O'Odham, a Native American woman who is holding a woven basket with both hands extended outward in front of her. She is dressed in a long dress and coat with a scarf on her head. At her feet are deer antlers, a desert lizard, saguaro cactus flower, sea shell, piece of broken pot, stone mano, two sticks placed at a seventy-five degree angle and lashed together where they cross, and the head and torso of a primitive figure. The figure stands in the center of the landscaped ellipse. The image of I'itoi, the elder brother, is painted at the top opening of the design.